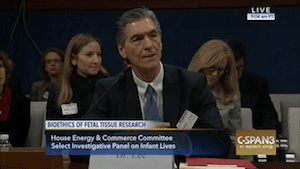 STEUBENVILLE, OH—Testifying March 2 at the U.S. Capitol before the Select Investigative Panel on Infant Lives, Dr. Patrick Lee, director of Franciscan University of Steubenville’s Center for Bioethics, said, “Governmental funding of abortion providers and the use of fetal tissue from elective abortions involve profound dehumanization of unborn human beings and are grave injustices.”

Lee was one of six expert witnesses—four selected by the Republican majority and two by the Democratic minority—who spoke on the ethical implications of using fetal tissue in biomedical research.

The investigative panel was formed in the wake of videos released last year that purported to show Planned Parenthood selling fetal tissue from aborted fetuses to researchers for profit, which is illegal.

Lee, who is the John N. and Jamie D. McAleer Professor of Bioethics at Franciscan University, was allowed eight minutes to present his case to the panel, along with submitted prepared testimony.

After being sworn in, Lee began by stating, “As the standard text of embryology, developmental biology, and genetics assert, a human embryo or fetus, from conception on, is a distinct, whole, human individual. The evidence for this is quite clear.”

He went on to describe the characteristics of a human embryo, which is “obviously human” for “unlike a cell or human tissue she has within her genetic structure all of the internal resources needed to actively develop herself to the mature stage of a human being . . . She is the same kind of being as you or me, only at an early stage of her life cycle.”

Referring to everyone in the room with him, Lee said, “It is wrong to intentionally kill us, and it would have been wrong to kill us when we were embryos or fetuses. All human beings, unborn as well as born—no matter at what age or size—are created equal and are endowed by their creator with fundamental unalienable rights.”

Lee responded to several questions from the panel members. He agreed with Pennsylvania Representative Joseph Pitts, R-16th District, that a conflict of interest exists when tissue procurement companies make financial contributions to an abortion clinic from which they harvest tissue.

Responding to Tennessee Representative Diane Black, R- 6th District, who asked if abortion clinics should be equipped with neonatal equipment to save babies inadvertently born alive, Lee stated, “I think if we were treating someone we genuinely recognized as a human being, as having intrinsic dignity, we would say we need to have available the kind of care that is needed if something goes wrong. Protection for babies born alive is an intrinsic right.”

Wednesday’s testimony was the Select Investigative Panel on Infant Lives’ first hearing on the ethics of fetal tissue research. The entire proceeding was carried live by C-SPAN and replayed that evening.