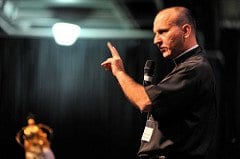 STEUBENVILLE, OH – A leading expert on the Catholic Church’s teaching about homosexuality spoke to priests, deacons, and seminarians at Franciscan University of Steubenville about ministering with love to those with same-sex attraction.

“The word that is most mutually associated with the Catholic Church and the topic of homosexuality is the word ‘no.'” In fact, the Church offers a big ‘yes’ grounded in truth and love, Father Paul Check told the 192 attendees of the Priests, Deacons, and Seminarians Retreat held June 20-24.

“Our teaching and our catechesis will be more effective when we situate that no to a wider yes which addresses the question of human virtues, the communion of love, and chastity as a power for all,” he said.

Father Check is the executive director of Courage International, an apostolate of the Catholic Church for persons with same-sex attraction.

During two presentations given during the four-day retreat, he encouraged priests to maintain an attitude of love and compassion when ministering to those with same-sex attraction, noting that most of those who seek assistance are doing it with much courage and with many questions. Priests should seek to give them an education in the question of “what sex is for and what the human person is for.”

“We want to have an open heart to everyone, and we want to convey the sense of hope to people that the desires of their heart can be fulfilled. The challenge for us is distinguishing authentic desires, desires consistent with our human nature, from those we know we all have that can veer off course,” said Father Check. “The search for understanding in this very difficult question in pastoral ministry is not a search for blame or accusation.”

“We do not want to harm people in any way in the words that we say and preaching that we do,” he said. “We want to be very careful in what we encourage and what we say because we do not want to cause harm to anyone. . . . The chastity that is possible has great benefit whether it is longevity, good health, peace of mind, and benefits to the soul.”

Fifty years ago, he said, there were only two sexually transmitted diseases that were considered epidemic: syphilis and gonorrhea. Today, there are over 25, and those engaging in homosexual activity are “disproportionately” effected.

“In this culture, there is a plague. A plague of loneliness,” he said. “The encounters [millennials] have had do not fill their hearts in the way that they have hoped. In addition to this plague of loneliness, we have unparalleled human intimacy in the sense of sexual intimacy. We have more sexual congress today than we’ve ever had because of the efficacy of chemical contraception . . . and because of the fall back to failed or not used contraception, which is abortion. At another time, people would have had reservations about entering into this realm because they didn’t want the unwanted consequence, which is pregnancy.”

A priest of the Diocese of Bridgeport, Connecticut, since 1997, Father Check holds an STB from the Gregorian University and an STL from the University of Holy Cross, both in Rome. He served as an officer in the U.S. Marine Corps for nine years prior to entering the seminary.